A Brief Overview of Angular Elements! 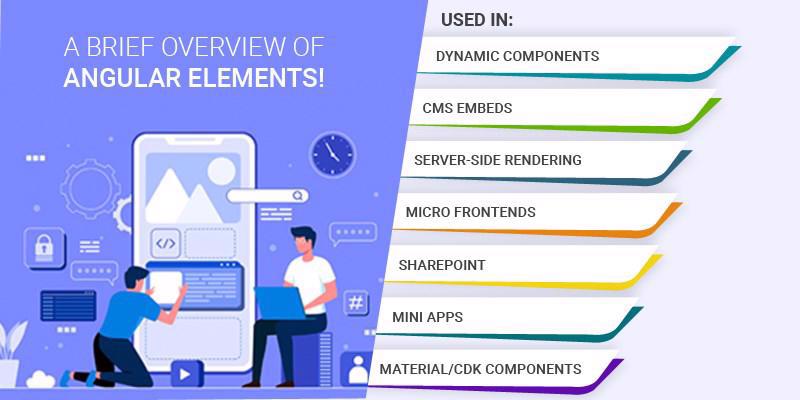 Introduced by Google in 2009, Angular is a fully-featured open-source JavaScript framework. Today, it is considered the perfect pick for the creation of robust, adaptable, and high-maintainable apps. As a result, it is largely preferred by several software professionals, small, and large businesses, and even by numerous AngularJS development services across the globe. Angular offers outstanding benefits like:

Looking at these advantages, we can comprehend why Angular JS app development is so popular and is considered the next big technology in the software world.

So we have talked enough about the significance of this futuristic framework. Now we will focus on a vital section of Angular development- Angular elements and their functions.

What are Angular Elements?

Library of Angular elements act as a bridge between custom web elements API and Angular components. Also, with these elements, one can leverage Angular's dependency injection as well.

For knowing Angular elements in depth, we also need to have some basic knowledge of the custom elements and web components. So let us have a glance at them too.

A bit about Custom Elements and Web Components

Basic Steps to Get Started with Angular Elements

Here are the general steps for creating a reusable custom element. We need to note that since the concept of Angular elements is in its early stages, there could be newer updates popping up later and it could impact the development environment. So, let’s look at the steps to get started.

Where can the Angular Elements be used?

As we already know, Angular is a new-age framework that has lots of power under its hood and Angular Elements make it all the more powerful. Also, with the help of Angular Elements library, the Angular code can be used in various applications across different frameworks. These elements boost Angular app development to a great extent.

I hope this article provided you with important insights on Angular Elements. Kindly drop us a mail at sales.enquiry@biz4solutions.com for any further queries.

Are you looking for developing Angular apps? Get in touch with Biz4Solutions, a renowned AngularJS development company with 9+ years of global-level experience in providing web and app development services. Hire well-experienced Angular developers for your project and be rest assured of getting high-quality end-product, transparency during the project, and timely results.