Top Angular App Development Blunders that can Ruin Your Project! 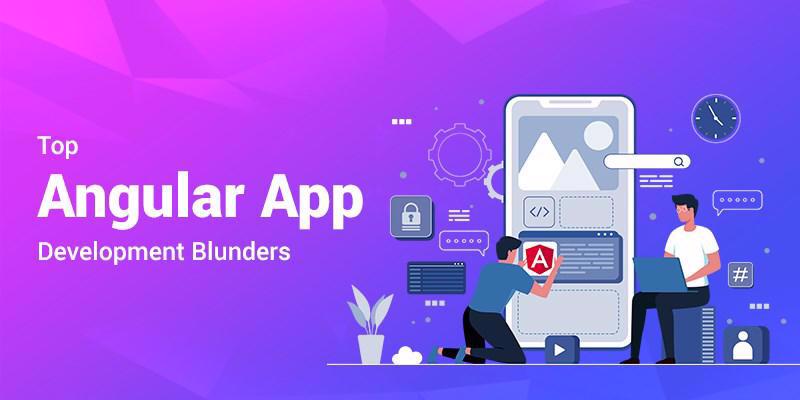 Angular is one of the most popular JavaScript framework, which offers myriad benefits to businesses worldwide. Numerous giants in the corporate world have used Angular app development for a wide range of projects. For instance,

But despite the ever-increasing demand and popularity, there are some flaws in this framework like any other framework. The developers and the Angular development services must be aware of these in order to create top-grade applications.

In this blog, we have outlined the most common mistakes committed by the Angular developers during the mobile app development process. So let’s get started. 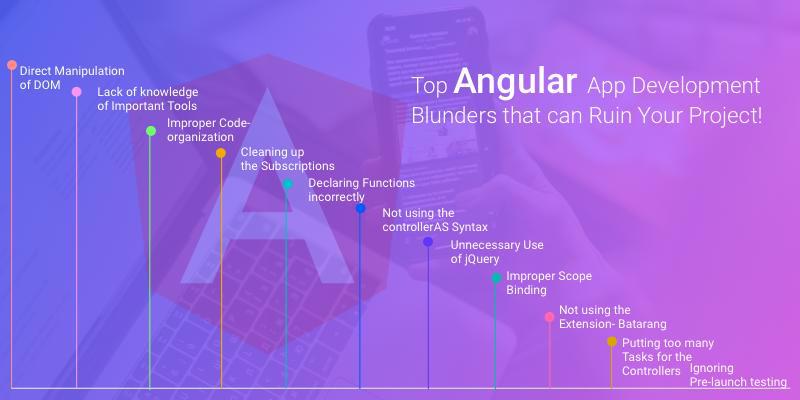 Another blunder that the developers tend to commit is making the changes directly in DOM. While changing the titles in pages or adding images, some developers may make modifications directly in DOM. But it is considered a bad practice. The DOM is a browser-specific API. It may tightly couple the Angular app’s code with the browser and this won’t allow the developers to target any other rendering environment later.

Lack of knowledge of Important Tools

This is one of the basic requirements that an Angular app development company must look into the developers while hiring.

Effective usage of the available development tools in Angular like Protractor and TestWhizin Angular helps in successful project development. Lack of knowledge on any of these tools or inability to use them can result in critical issues sooner or later. It affects project management, error handling in the project, the performance of the end product, and much more.

In Angular, organizing the code into small chunks is considered beneficial as it simplifies the development process and also helps to track any errors and resolve them easily. This approach is much useful when several developers work on the same project. But since this framework uses MVC architecture, at times the developers may add excessive code to a single controller. Such an improper distribution of code may create issues in the later stages of development.

Cleaning up the Subscriptions

Unsubscribing to the unnecessary and older subscriptions is also a vital step in Angular development. The developers must clean up such subscriptions from time-to-time as these can cause a threat to data security and lead to several other issues. They should also avoid new subscriptions constantly.

Sometimes, the developers fail to assign the functions to a specific variable. In such cases, the code is at risk of being manipulated. So, it is essential to properly declare functions to the variables. It provides the following benefits:

Not using the controller AS Syntax

For assigning a model to the controller object, usually, the developers use $scope. But injecting the scope isn’t the right way to do it. Instead, using the controller As syntax is quite an effective and comparatively simpler method. Also, this syntax can be used in multiple ways in app development. But this syntax also has a drawback, that it provides confusing results while handling various nested scopes.

Unnecessary Use of jQuery

jQuery is commonly used for event-handling, for AJAX operations, and for making DOM manipulation easier. But it is advisable to first use the features available in Angular to the fullest and then use jQuery if required. Developers tend to first prefer jQuery without exploring options in Angular and this may result in unnecessary complications.

As we know, Angular uses the MVC model. Here, the scope is a set of built-in objects that consists of app data. Scope binds controller and view in the MVC model. At times, developers don’t follow the scoping rules provided by Angular which may result in issues in the app development process. The developers must properly assemble their scope objects.

Not using the Extension- Batarang

Batarang is a highly advantageous Google Chrome extension that aids in development as well as the debugging process. But this extension is often ignored by the developers and not used to its fullest potential.

Putting too many Tasks for the Controllers

In the hurry to meet deadlines, developers may mix logic layers and allocate more tasks to controllers than necessary. This can result in a code that will execute more functions for a certain situation and may end-up in performance issues. For instance- having several event handlers or performing AJAX calls in controllers.

Needless to say, it is imperative to do adequate testing before an app is launched in the market. The app should be tested in cross browsers and different environments using tools like BrowserStack or LambdaTest if required. This helps in identifying the bugs if any. These bugs can be worked upon to deliver a successful app. Failing to do so can reduce the success rates to a large extent.

Hope this blog proved useful to you.

We would like to know about your experiences too.

If you have come across any other mistakes in Angular app development, do share it with us in the comment section below.